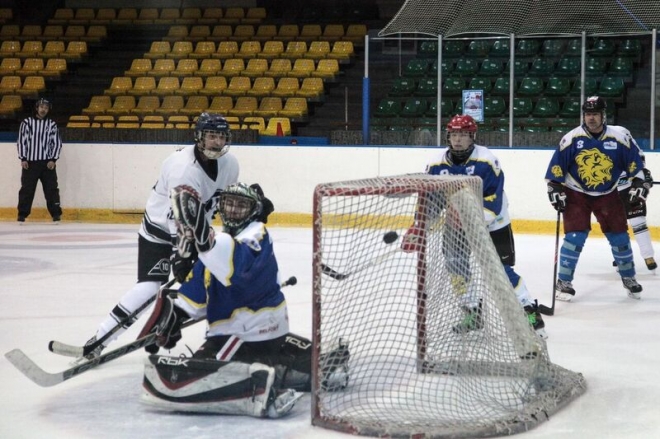 The defending Trophée Loisir Division Est champions Puckers traveled to Belfort for the season opener. This is the third year in a row that the Puckers had to take the 4-hour bus ride to Belfort to start the season.

And for the third year in a row, the Trophée Loisir runner-up from last season claims victory in what turned out a fairly easy game. Unlike in previous match-ups with the Lions (they trailed 0-5 and 0-2 in the previous two years), the Puckers did find into the game pretty much from the get-go.

The shuffling of the roster this season created a pretty powerful first line with Momo Lutov, Charles Vallée and Mike Mekhaeel on offense and David Donzel and Alban Menguelti on defense. And it paid its first dividends at the 4 minute mark when Mekhaeel hit the one-timer home on a nice feed by Lutov and Vallée.

The same combination worked 7 minutes later when Mekhaeel was again all alone in the slot to slide the puck behind the Belfort netminder.

The second line featured newcomer Jonathan Laforge with his fellow Canadian Nick Aubin and captain Yves Barthels. In Canadian fashion, the trio played the cycle deep in the Belfort end pretty much all game and it led to Laforge's first D4 Pucker career goal at the 13 minute mark on a pass from Aubin.

3 1/2 minutes later Barthels won the face-off, Laforge picked it up and fed it easily to Kostohryz at the blue line who sent a knuckle puck towards the goal that ended up slipping past the netminder. The score was already 4-0. On the same shift, the Canadian duo combined for another goal on a rush with Aubin scoring on a pass from Laforge.

Matthias Rainer, the Puckers netminder saw pretty much no action until the next shift when a deflection went five-hole and Belfort broke Rainer's shutout bid on their first shot. Just a minute later, Alban Menguelti returned the favour and one-timed the pass from Lutov in laser-beam fashion into the back of the net. The period ended 6-1 in favour of the Puckers. For once, the Belfort game didn't need to be a comeback win. The game was pretty much under control.

On fresh ice, Mekhaeel completed the hat trick in a little over 20 minutes of play on Lutov's fourth point of the night - all assists. The game was played in only one direction and practically at one end of the ice, The first line went back to perimeter passing, the "Canadian" line played the cycle deep in the corners, but none of the 3 lines had anything to show for for the next 15 minutes. Despite numerous chances, the score remained 7-1 until the floodgates opened again at the 35 minute mark with 3 goals in 3 minutes. First a tic-tac-toe play between all 5 players of the second line that ended with Laforge's second goal of the night on a pass by Aubin and Cyril Schweitzer. Then Aubin's second goal on a pass by Laforge. And finally the third line's scoring drought found an end when Miikka Heinonen hit home the rebound from Paul Jeanson's amazing one-timer on a pass from David Jozek. The Puckers headed to the lockers with a comfortable 10-1 lead.

The third period was pretty much uneventful with Mekhaeel adding the lone goal just 4 minutes into the period. Rainer made a few fantastic saves on a couple of break-aways and the game ended with a score of 11-1.

The Puckers go back to where they ended the previous season: at the top of the standings in the Division Est. In other Sunday game action Epinal beat Amneville 7-4 and Mulhouse routed Strasbourg A 12-4.

The Puckers also played a friendly game a little over 12 hours prior to the Belfort game and beat Beaufort 1 with a score of 9-6 on goals by Jonathan Laforge (4 goals), Yves Barthels (2 goals, of which one penalty shot), Mike Mekhaeel, Momo Lutov and Gaby Hriscu.