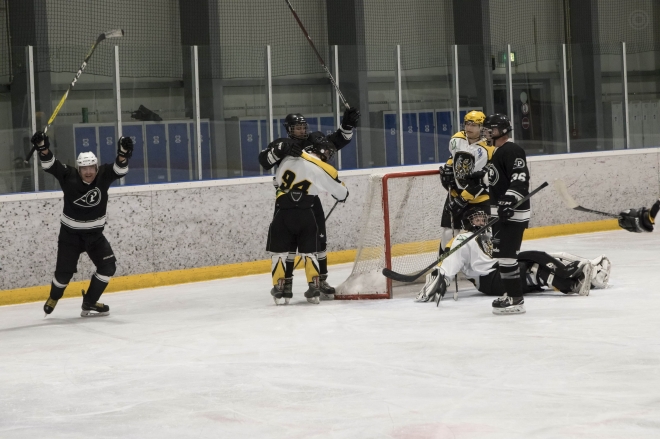 Puckers take league lead with win over Strasbourg A

In the clash of the Titans – this year’s most probable top 2 teams in the Division Est of the Trophée Loisir – the Puckers defeated their new archrival Strasbourg A with a score of 4-1 on Saturday night. The Puckers only regular season loss last season came at the hands of the Alsatian team last year, so there was a strong desire for revenge on the Luxembourg side.

After an easy 10-1 win against Colmar last week, the host felt confident going into the game. The lines have been re-shuffled this season with Charles Vallée centering the “Canadian Twins” line, now making it the “Canadian Triplets” line with Nick Aubin and Jonathan Laforge, with Sean O’Driscoll joining Mladen Lutov and Mike Mekhaeel on the “Black” line and with the “Scandinavian oldies” Miikka Heinonen, Peter Hult and Patrick Ahlstrand playing together at a high pace. Captain Yves Barthels is playing defense with youngster Cyril Schweitzer while Alban Menguelti and Bohus Kostohryz form the dynamic duo and Fred Leduc moved to the third line to play with David Jozek.

There is also a bigger focus on skating and break-outs at the Puckers practices and it showed in the first period. With quick transition play and crisp and precise passes, the Puckers dominated play from the get go and on the very first shift, within the 1 minute mark, Momo Lutov scored his first of the season on a pass from Mekhaeel. The rest of the period had long stretches of puck possession by the Puckers with little to show for. They created chance after chance, but failed to capitalize on them while leaving little room to Strasbourg to find their rhythm or pose an offensive threat. The younger, hard-skating squad from Alsace was hoping for break-away chances, but Matthias Rainer stood tall in the Puckers net. The Puckers were well in control of the game, despite the tight score.

The second period started with a sloppy home team, allowing odd man rushes and turning the puck over too many times. Strasbourg made them pay for it when just under 5 minutes into the period Francis Lavallée scored the equalizer to stun the home crowd. Strasbourg had the better chances, but failed to capitalize on more of them. Then in just under 2 minutes of play, the Puckers took the momentum back by scoring three unanswered goals. First Nick “Maurice” Aubin fed Laforge with a sick saucer pass and Laforge broke the tie with a quick backhander. Then, just over a minute later, Lutov, who had missed the first game for personal reasons and now demonstrated his value to the team, scored after a steal at the blue line to roof the perfect shot under the bar. On the same shift, less than a minute later, Lutov completed the hattrick on passes from O’Driscoll and Mekhaeel and the Puckers only had to cruise the game home.

The third period was similar to the first. The Puckers controlled much of the action and created multiple scoring chances while not being able to convert. Strasbourg had the occasional break-away chance but either got frustrated by a solid defensive effort or by a strong Rainer in net. The home team didn’t give anything up and kept momentum on their side as time ran out for the guests from Strasbourg to get back into the game. All in all a well deserved win for the Puckers.

Hard hat went to Momo Lutov for his hattrick and his glorious return to the line-up.

Puckers TV was taking extensive footage of the game and has provided in-game and post-game interviews, all available on its Youtube channel - https://www.youtube.com/channel/UCMb_fim-JJvxEg_XqoF1ODg, courtesy of Liam McEvoy and LDMCEVOY Pictures.

PuckersTV is also looking for funding to be able to continue to provide game coverage and amazing videos: https://www.gofundme.com/puckerstv

Next game for Puckers will be on the road, in Belfort on November 12.