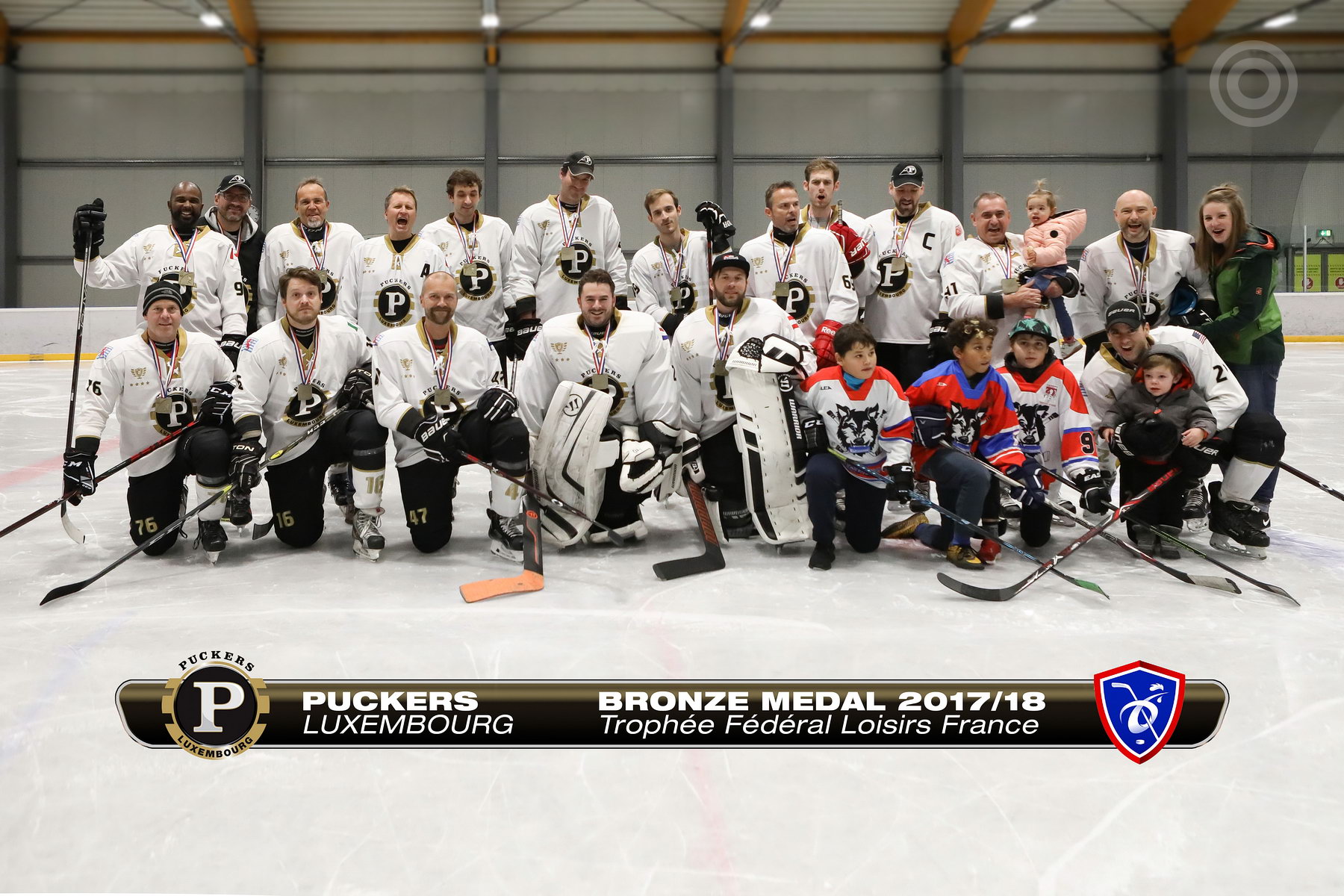 After collecting easy wins against Belfort (14-2) and Strasbourg A (forfeit 5-0), the Puckers finally faced one of this season’s main rivals in their home opener. After making the playoffs last season and with their D3 team moving up to D2, Colmar split their team into two for the Trophee Loisir with a much stronger first team roster featuring a few former D3 players. The Cool Puckers got some of that medicine a week earlier when they came home with a 1-10 defeat against Colmar 1.

But Colmar has traditionally been having trouble getting key players to travel on long road trips, so the Puckers did not face a full squad in their first home game. Only 8 players and 1 goalie made it to the Kockelscheuer rink.

Meanwhile the Puckers celebrated their last season bronze medal with a small ceremony before the game. Friends and families made their way to the rink to see their heroes get awarded the medals by club President Monique Scheier.

The Puckers roster has undergone only a small change compared to the previous season. David Oiseau Donzel has signed up with the new team in Metz as it’s closer to his home. All other OT heroes from the great final game of the 2018 season against Cleon are back.

The Puckers took control of the game from the puck drop, imposing wave after wave of attacks against the Colmar netminder. And just under 3 minutes into the game, Jonathan Laforge, back on the first line with Charles Vallee and Mladen Lutov, found the back of the net for his fifth goal of the season. Shortly thereafter the second line of Sean O’Driscoll, Mike Mekhaeel and Nick Aubin made their presence felt when the “Boston line” combined for the 2-0 on a goal scored by O’Driscoll.

The rest of the period saw a game that gave the impression that the ice was tilted in Colmar’s direction, but the score after 20 was only 2-0.

The message in the lockers was to put the game away early so that it was clear who the reigning Division Est champions are. And 2 minutes into the second period, Chuck Vallee struck first on a feed from Mekhaeel with Antoine Verdier just leaving the box. A shorthanded goal that doesn’t count as shorthanded. Laforge would score two more goals in the period for the hattrick and Miikka Heinonen would score on a perfect breakout play to settle the score at 7-0 before Colmar finally beat Puckers netminder Matthias Rainer for the 7-1 score after 2 periods.

In the final period, it took all but 35 seconds for Vallee to score his second of the night followed by another goal by O’Driscoll, then Laforge with his fourth. Momo Lutov added a highlight reel goal when tapping in his own rebound out of mid-air. He would score one more before Mekhaeel scored the 13th and final Puckers goal. The final score was 13-2 for the home team. A dominant performance by the Puckers who find their way back to the top of the Division Est rankings, closely followed by a strong Besancon team.

Hard hat went to Liam McEvoy for his fantastic work behind the scenes to organize the medal ceremony and for filming hours and hours of video about the Puckers for his upcoming movie “The Spirit of the Game”. The Puckers are truly blessed to have such a hardworking friend and teammate to capture on film incredible memories that the team have shared over a span of two exciting seasons that saw them beat the odds again and again in sometimes dramatic fashion.

Next game is Sunday November 18 in Amneville.