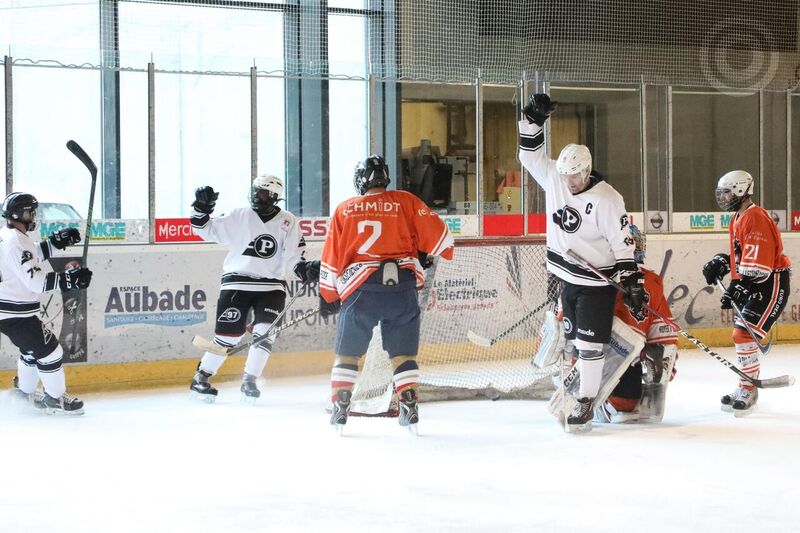 Aubin scoring one of his 4 goals!

Puckers still unbeaten after an 8-3 win in Epinal

After 7 games played – the fewest in the league - the Puckers are still the only unbeaten team in the league. Traveling to French hockey hotbed Epinal on a Sunday morning, the expectation from the get-go was that a win was the only option. And that intention was made clear with a statement on the very first shift. The North American duo of Nick Aubin and Sean O’Driscoll together with injured captain Yves Barthels – who was replacing the third “Bostonian” Mike Mekhaeel on the line – struck after only 10 seconds for the 1-0 lead when O’Driscoll found the back of the net on a pass from Aubin. Just 34 seconds later, on the same shift, Aubin beat the Epinal netminder with a smooth backhander from the right side for the 2-0 lead early on.

It announced itself to become a long game for the hosts from Epinal.

But one should never underestimate Epinal. They have long been the only other viable contender in the Division Est alongside the Puckers even though they have been struggling the past couple of seasons. And just under 4 minutes into the game, they took advantage of a defensive misunderstanding to beat Puckers goalie Matthias Rainer to cut the lead in half. The rest of period saw the Puckers lines buzzing around in the Epinal end but unable to beat the very good Epinal goalie. The newly assembled line of Jonathan Laforge playing alongside Momo Lutov and David Donzel then also found the back of the net when Lutov converted on a tic tac toe play with Laforge. At the end of the period, the score was 3-1 in favour of the guests.

The second period turned out to be the most difficult period for the Puckers. The instructions from the captain were not to let Epinal back into the game by letting them have the next goal, but exactly that happened at the halfway point of the period when Rainer was beaten on a broken play. Aubin then potted his second of the game after a great breakaway play by defenseman David Jozek. The period ended in a 1-1 tie and the score now was 4-2.

The instructions for the last period were then exactly the same: score the next goal! But again, the exact opposite happened and the great skater and Epinal captain Loic Fournier again made it a a one-shot game when he scored on a breakaway. But with a flurry of goals in the following 10 minutes, two by Aubin, then two by Donzel, the Puckers finally broke through the wall in the Epinal net. Aubin completed the hattrick  with another slick backhand under the bar and added his fourth tally shortly after. Him and O’Driscoll ran like clockwork. Donzel first converted a nice pass from Lutov by slipping a puck between the goalie and the pipe and then added a goal on a slapshot in the slot.

The final score was a well-deserved 8-3 for a dominating Puckers squad that, yet again, imposes its play in the Trophee Loisir Division Est. After wins in Besancon (by a tight 4-3 score) and against Amneville at home (11-2), the Puckers remain the norm of the division and are on their way to cruising back to the top of the standings. Besancon still leads them by a couple of points, but has played two more games.

Man of the match earning the hard hat for the night was Nick Aubin with his 5-point game.

The next game will be the clash of the two leaders - Besançon and Puckers - in Kockelscheuer on March 10 at 16:30.