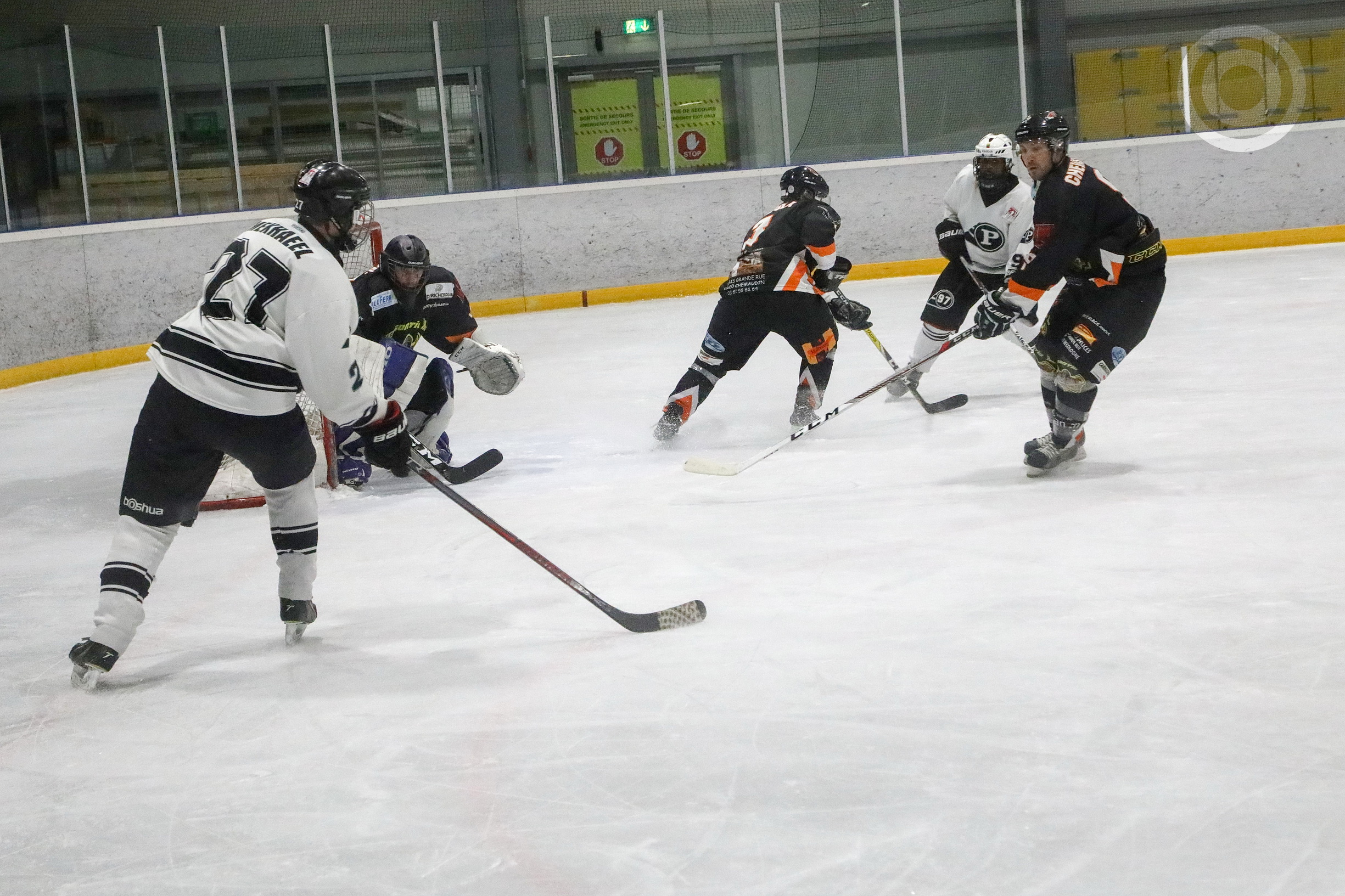 Mike Mekhaeel and Nick Aubin on the attack

The clash of the league leaders basically was a rematch of the game in Besancon 4 weeks earlier.

Winning the game would guarantee the Puckers the league lead and give them an early option for making the playoffs in the Trophee Loisirs - a semi-final tournament in May.
After the tight game in Besançon, where some Besançon players claimed on social media that they dominated the Puckers and came up short because of penalties and shortage of luck (!), the Puckers were keen to demonstrate that the 4-3 win was not a fluke.

But the jitters accompanied the Puckers squad on the ice for most of the game. They managed to impose their game, but failed to create enough offense to get on the scoreboard. And thus Besancon opened the scoring halfway through the first period when a miscue in the defensive zone gave Leautier a perfect look in the slot to beat Puckers netminder Matthias Rainer for the 1-0 lead. But finally getting rid of the nervouseness, the Puckers responded 3 minutes later and Mike Mekhaeel tied the game after beating both defensemen and the goalie on a solo play. Just two minutes later, the first line executed a perfect play with Momo Lutov passing to Jonathan Laforge who found David Donzel open in the slot and the puck ended in the back of the net for the 2-1 Puckers lead. On the next shift, another nice combination between Mekhaeel, Nick Aubin and Sean O'Driscoll and the Suffolk University Athletics Hall of Famer O'Driscoll roofed the puck just under the bar for a comfortable 3-1 Puckers lead.
But Besancon was determined not to go down without a fight and despite being outplayed most of the period and the game, they fought throughout the game, played very physical and skated hard to keep the game close. It paid off in the last minute of the period when Besancon's Joly took a hard slapshot from the point to beat Rainer for the 3-2.

The second period was a very tightly played period with a Puckers team that didn't show the grit and resolution that we usually see in them in games like these. Besançon on the other hand executed a good game plan by closing the slot, blocking shots and playing the man high for breakaway chances. Just four minutes into the period, it worked when the Puckers forwards got caught deep in the Besancon end and allowed a 4 on 2 breakaway which captain Bruot took advantage of to tie the game at 3. The Puckers got themselves in trouble by not skating hard enough. They did create a number of scoring chances - including a couple of shots that rang off the post - but couldn't find the back of the net.

The third period announced itself to be very tight. The next goal would probably decide the winner of the game. The game got more intense and more physical and a number of penalties had to be called on both sides. Besancon took a time-out, trying to take advantage of a power-play, but the Puckers were determined to hold on and come through. Then, Mister Clutch himself, Momo Lutov, with just under 6 minutes to play took a hard shot just inside the blue line to beat the Besançon netminder for the 4-3 lead.
Besançon still wasn't ready to admit defeat and made it close in the final 3 minutes. Captain Yves Barthels  made an untimely trip to the penalty box when he took down a Besançon player who was open in the slot and would otherwise have had a great scoring opportunity and the Puckers had to fight through the powerplay.
And just after the horn sounded, emotions boiled over and there were a number of scrums with both teams hopping over the boards and going at each other. Nothing major happened and after a couple of minutes the scrums dissipated and the teams lined up to shake hands and take the traditional after game team photo.

In the end, it was a deserved win for the Puckers who dominated long stretches of the game, couldn't convert on a number of chances, but let Besancon hang around. Besancon on the other hand executed their game plan perfectly and fought well. It was a great and entertaining game with good tempo, thrilling to the very end.

With Besançon then losing the next day in Amneville, the Puckers take and keep the lead with a number of games in hand. Remaining games are in Strasbourg (A) and Mulhouse and at home against Mulhouse and their junior brothers Cool Puckers who lost in Strasbourg on Sunday to remain winless in 9 games.

Hard hat went to Mister Clutch, Lutov for his timely goal to seal the win.