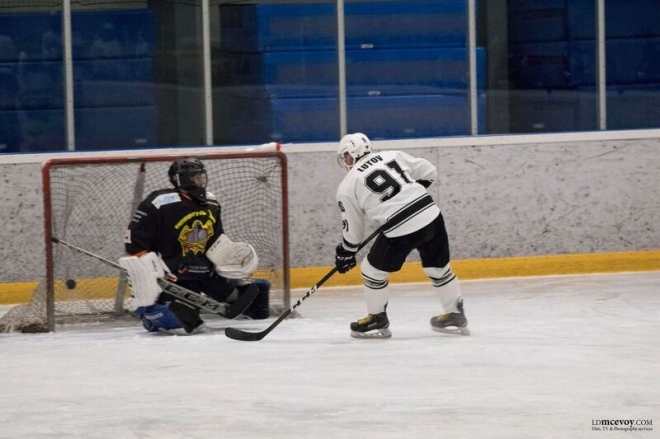 Saturday night saw the match-up that cost the Puckers their only loss during the 2015-2016 regular season. Besançon had to travel to Luxembourg this time though and, despite a valiant effort, had to travel back home with a 0-5 defeat.

With Puckers top scorer Jonathan Laforge out, new recruit and Suffolk University Athletics (Boston) Hall of Fame inductee Sean O'Driscoll took his place on the left wing of the "white" line. But it would be the "black" line around Momo Lutov that would contribute most to the win.

In what was a tightly played defensive game, the Puckers had more possession and spent most of their time in the offensive zone while they also controlled the neutral zone and kept Besançon mostly outside their own blue line. But Besançon had their players collapse deep in their defensive zone and relied on a good goalie. It took 7 1/2 minutes for sniper Mike Mekhaeel to one-time the perfect pass from Charles Vallee and score for the 1-0 lead.

The rest of the period saw wave after wave of attacks by the Lutov-Mekhaeel-Vallee line, but the score would stand until the end of the period.

In the second period, Besançon started to get some life, but Matthias Rainer in the Puckers' net would give them nothing. And just under 5 minutes in, David Donzel used a scramble in front of the net to roof a back-hand just under the bar for the 2-0 lead with helpers going to Vallee and Lutov. Another beautiful shot on a perfectly executed play. The only other goal of the period came on a shot from the point on the powerplay by Bohus Kostohryz. A double tip in front of the net, first by Vallee, then by Mekhaeel left the Besançon goalie without a chance and the Puckers now had the game well under control. Rainer remained perfect in net and stopped Besançon's best player point blank on a breakaway just minutes later.

The third period saw much of the same, even though Besançon still had life and had a little bit of momentum early, but Rainer was there to stop anything that was directed at him. With Vallee in the box, Lutov picked up a missed shot by Besancon at his own blue line and skated in alone on the Besançon goal to score his team leading 10th goal of the season shorthanded. With 7 minutes left to play, that pretty much ended any hopes of Besançon to stage a comeback. And with just over a minute left in the game, Miikka Heinonen scored his 5th of the season on another one-timer after 58-year-old Peter Hult won the battles in the corner to feed him the puck.

The Puckers scored uncharacteristically few goals, but each one of them was a beauty.

Hard hat for hardest worker of the game went to Matthias Rainer who had his first shutout as a Pucker.

The Puckers will play Tornado in the season's first Luxembourg Cup match-up on Tuesday, Jan 17 at 20:00 and fiercest rival Epinal on Saturday, Jan 21 at 20:00.