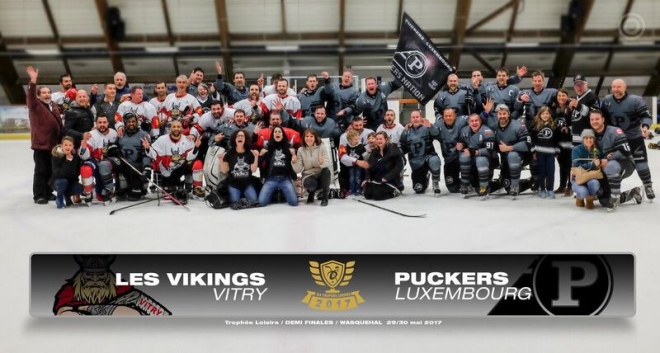 As winner of the Division Est of the French Trophee Loisir, the Puckers got to compete in the first of four semi-final tournaments that will determine the finalists for the 2017 title. The Trophee Loisir championship is composed of a total of 65 teams grouped into 5 divisions across France (and Luxembourg). The tournament took place in Wasquehal over the weekend and as for all semi-finals, 4 teams were supposed to compete with only the winner heading to Paris for the carré final. Unfortunately, because of a lack of hosting teams and because Wasquehal could only host the tournament this weekend, one of the four teams could not be confirmed and thus not attend. The positioning in the South-East division between Serre-Chevalier and Briancon was pending another final game this same weekend. It was thus decided to play a 3-team tournament and to change the format of the tournament from a simple round-robin between 4 teams to a round-robin between 3 teams followed by a semi-final (2nd vs 3rd) and a final (1st vs winner of semi-final).

The schedule was pretty tight in Wasquehal with 5 games to be played between 12:30 on Saturday and 19:00 on Sunday evening. The first game saw the North division winner Wasquehal face off against the third placed of the IDF (Paris) division Vitry. Wasquehal won 7-2.

The rested and fresh Puckers then faced a tired Vitry team right after that game, at 15:30 and imposed their game plan from the get go. With 3 complete lines, 2 goalies and an extra pair of defensemen, the Puckers presented a full squad to make their intentions clear: show that the second place in the 2016 Trophee Loisir competition was not a fluke. The objective was to head back to the Finals.

And all three lines dominated play early on. The first period saw the Puckers take a commanding 4-0 lead. Second line winger Nick Aubin opened the scoring 5 minutes into the game, first line winger Charles Vallee (whose father Pierre attended the tournament after flying in from Quebec the day before) and third line winger Sean O’Driscoll added tallies and Aubin scored his second on a penalty shot with a nice deke and a shot under the cross-bar.

Vitry had a similar mix of players with a few snipers and some good veterans. And they struck first in the second period, just 20 seconds in to cut the Puckers’ lead to 3. The period ended in a 2-2 tie but the Puckers still had a 4-goal lead. Captain Yves Barthels and the oldest player on the team “Fisherman” Peter Hult had the two goals.

Similar to the start of the second, the third period saw Vitry get the better start with an early goal, but the batteries were running low and the Puckers were determined not to let the game slip away. With a second tally from Vallee , a pair of goals from Jonathan Laforge and with Aubin completing the hattrick that then earned him the hard hat for the game, the game ended with an easy 10-4 Puckers win. The Canadian “twins” Aubin and Laforge playing on the second line with captain Barthels carried the team, but all 3 lines clicked throughout the game and Thierry Van der Kallen had a solid game in net.

The Puckers then had their own back-to-back game albeit with a 90 minute break in between, facing a slightly more rested Wasquehal team. The winner of the game would get a 24-hour rest and head straight to the final while the loser would have to play Vitry in the semi-final at 8:00 am the next morning.

The hosts were a fast-skating and much younger team, but the Puckers managed the game well and dominated play for large stretches. After a face-off win by Barthels, Aubin again opened the scoring, this time with just over a minute played. Two more pucks would end up in the back of the Wasquehal net with Vallée and Miikka Heinonen – who was impressive on the third line throughout the tournament – adding their names to the gamesheet. The Puckers led the game 3-0 at the first intermission despite playing shorthanded for half of the period (5 minor penalties). With flashback memories of the clearly partial officiating that led to the only regular season loss to Strasbourg coming back, the captain fired up his team in the intermission to punish the Wasquehal team with goals and he then led the way on the ice by scoring the only goal of the period, but Wasquehal had also scored on their first shift of the period on the powerplay, so the second period ended again in a tie, like in the Vitry game. But the game was under control and even though Wasquehal would score another goal in the third, on a 5-on-3 powerplay (go figure…), there was no doubt that the Puckers would not let them back into the game. Matthias Rainer was like a wall in net and only got the two power-play goals against and Aubin sealed the deal at the end with his fifth goal of the tournament and the Puckers won the game 5-2. The hard hat was awarded to the captain for his intermission speech and for the toll his body took after jumping into the passing lane on a break-away by Wasquehal and hitting the boards head first. The team may have thought he needed the hard hat for protecting his head…

The Puckers deserved a nice dinner with some celebrations and were able to rest up until 19:00 the next day while Vitry and Wasquehal had a re-match rendez-vous at 8:00. Not that surprisingly, Vitry managed to get their revenge and took the game 6-5 to face the Puckers in the final, ousting the hosts from Wasquehal.

The Puckers waited anxiously to play their third and final (full) game in less than 30 hours and had the jitters early on. Rainer was back in net and had another stellar performance against a Vitry team that was hungry for revenge and determined not to go down without a fight, despite having played one more game in the same time span. After going empty handed (but with two assistes) in the first two games, leading scorer Momo Lutov finally found the back of the net three minutes into the game and the jitters were slowly going away. Just three minutes later, Laforge sniped the puck right into the top left hand corner under the bar. The Puckers seemed to be comfortably in control of the game. But Vitry was not ready to give up and cut the lead in half midway through the period.

The second period was a tight battle between a Puckers team that started to slow down and a Vitry team that gained momentum. Heinonen’s determined shift led to another goal and a 3-1 lead, but Vitry would strike back less than a minute later and the rest of the period was a game of a back and forth with Vitry winning the one-on-one battles, but the Puckers defense and Rainer standing tall. With the score 3-2 and 20 minutes left to play, energy was going to determine who was going to come out on top. But who would have thought that untimely penalties would provide the boost that the Puckers needed. With Aubin sitting in the box after an unfortunate tripping call, Laforge restored the two goal cushion short-handed with 15 minutes left to play in the game. Vitry would never recover and the Puckers struck three more times, with Aubin scoring his sixth and seventh of the tournament and Mike Mekhaeel finally adding a goal. Two of these three goals would be short-handed as well and the Puckers win 7-3. Hard hat went to Ainars Freimanis who sacrificed his playing time as 7th defensemen and was a true example of the Puckers’ amazing team spirit!

The Puckers never trailed in the tournament, won all of their games and ALL 9 forwards on the team scored while the defensemen and goalies played solid defensive games. Clearly a complete team effort and a deserved tournament win and return to the Finals in Meudon on May 26 to 28 against the three other semi-final tournament winners which will be determined over the next couple of weeks.