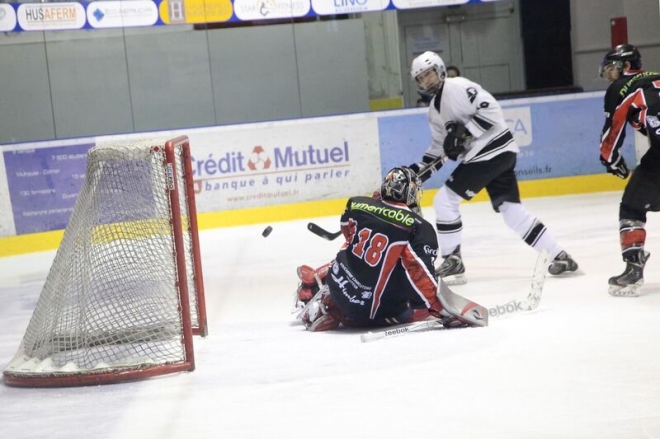 The much younger hosts from Mulhouse were a fast and physically strong team, quick on the forecheck, hard on the puck. And they struck first on a Puckers’ defensive mistake under pressure which led to a turnover and a quick shot in the slot. 1-0 after 2 minutes. But with a Mulhouse player in the box for charging, the “black line” set up shop in the Mulhouse end. Momo Lutov fed the puck to his long time linemate Charles Vallée, “Montréal Express” then found a seam and Mike Mekhaeel one-timed it on a quick release to tie the game.

Mulhouse capitalized twice more in the period on turnovers by the Puckers’ defense. First a wrap around behind the net ended up squeezing through Matthias Rainer’s pads and the post and then a fanned on shot that knuckle pucked its way under Rainer’s catching glove. The game seemed to be getting out of hand, but before the period ended, captain Yves Barthels won the face-off cleanly to (old) rookie defenseman Frederic Leduc who then found the (even older) Niclas Lundberg rushing up the ice and allowed him to score a breakaway goal with just 20 seconds left in the period.

The second period was pretty much a repeat of the first. Mulhouse used their fast legs to strike early, but the Puckers didn’t let up. Just 60 seconds after the Mulhouse 4-2 goal, Lutov responded by converting a Mekhaeel pass and half way through the game with Mulhouse on the powerplay, Mekhaeel led the effort of defiance by scoring short-handed to tie the game 4-4. Mulhouse ended the period on a strong note, scoring a powerplay goal followed by an even-strength goal within a minute to end the second period with a 6-4 lead.

Having traveled with only 10 guys and with an age average of 43 (vs Mulhouse’s 29), a comeback by the Puckers in the third period seemed to be impossible. But in the first 5 minutes of the third period, the Puckers showed again their resilience and their determination never to give up. On the eve of his 49th birthday, Momo – we got Momo – Lutov broke Vallée’s Puckers record of fastest goal to start a period by scoring within 6 seconds. Momo first won the face-off to none other than Montreal Express himself who then fed it back to set Momo up for the goal. Four minutes later the captain tied the game on a left-side rush with a screened shot from the blue line that beat the goalie on the far lower corner. Just a minute later, Cyril Schweitzer decided to take things into his own hands and went on a rush alone, with all 4 of his linemates changing, to score his first goal of the season. Timely goal to give the Puckers their first lead of the game.

Unfortunately the Puckers couldn’t capitalize on a few more rushes including a shot by Vallée that bounced off the goalie just to stop on the line (see photo) and on a 1:08 minute 5-on-3 powerplay. They paid for it when Mulhouse beat a sliding Rainer on the rebound to tie the game again. Mekhaeel then lost his cool and ended up with a misconduct penalty and Momo Lutov basically played the rest of the game without a break. With 3 seconds left, the referees made sure the Puckers got another malus by assessing another questionable penalty (there were a few in the game), but Mulhouse could not capitalize and the game ended in a 7-7 tie.

Despite his 7 goals allowed, Rainer’s performance in goal was fantastic and he kept his team in the game for long stretches by making save after save. Momo Lutov played like he was the Hulk, Charlie Vallée was dangling the jockstraps out of everybody and Mike the Screamer almost willed every puck into the goal with his angry determination.

Hard hat went to Niclas – Sabotan – Lundberg. Niclas has just come back from a long term injury, has not been on the ice in weeks, is 50+ and still beat a bunch of kids half his age to score a fantastic breakaway goal.

The Puckers remain at the top of the standings, tied with Mulhouse, but owning the tie-breaker and with two games in hand (at Amneville next weekend and against Colmar in the season home finale the week after) and are now all but guaranteed to repeat as Division Est champions.