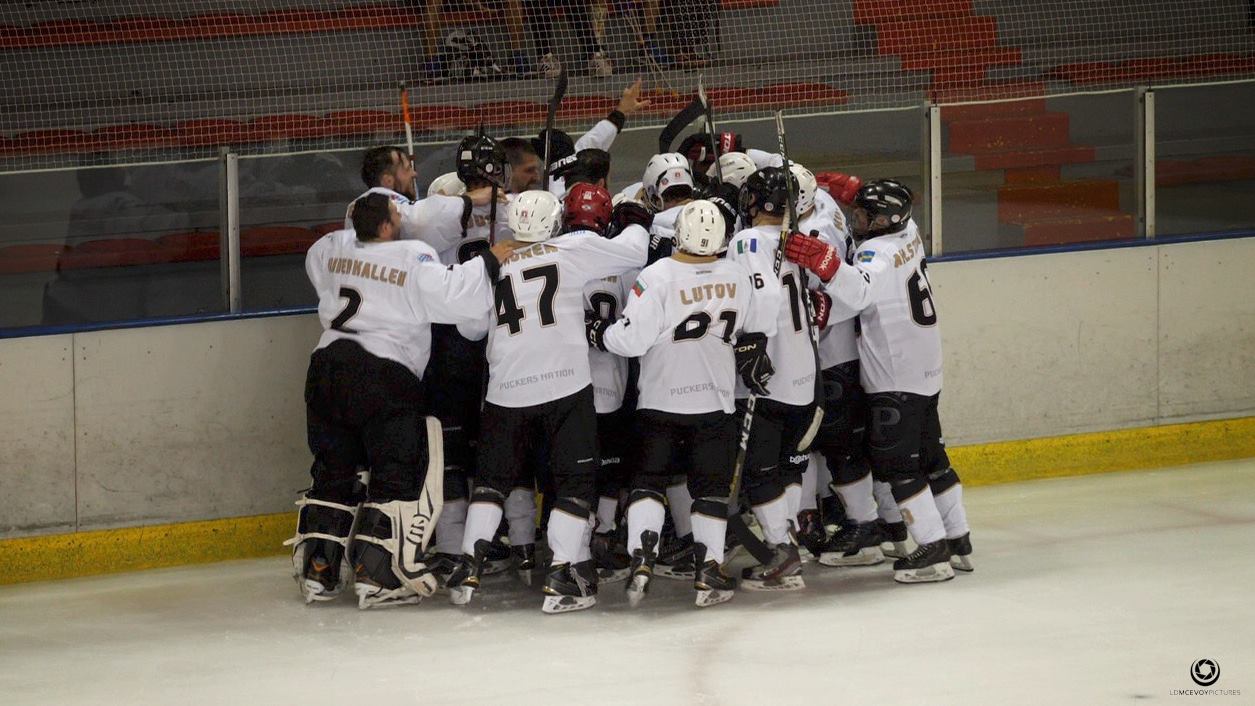 It was a disappointing weekend for the Puckers. After a heart-breaking loss against ACBB followed by a bitter defeat against arch-rival Meudon on Saturday, the Puckers were facing the heavy favourite and undefeated reigning champions Cleon in their final game on Sunday afternoon. The gold and silver medals were already out of reach and only a win against Cleon would secure a bronze medal. Cleon beat Meudon 4-3 on Saturday and ACBB 4-2 on Sunday morning. On their website they assumed that a win against the Puckers was just a formality as they considered themselves already repeating champs. But the Puckers wanted to prove them wrong and stunned the champs in their usual cliffhanger fashion.

The game started at a high pace. The young Cleon team’s oldest player is almost 10 years younger than the Puckers’ average age, so despite the game in the morning, they seemed to have fresh legs and seemed determined to impose their game and a win. There were chances on both sides, but the goaltenders battled. Then Cleon struck, twice in less than a minute, just before the halfway point of the period. Then Captain Yves Barthels headed to the box for a rare highsticking penalty and it only took Cleon 7 seconds to find the back of the net. They were on pace to beat the Puckers and claim their second title, despite the fact that the Puckers’ strategy of trying to contain their best player, Jason Lorcher – who had a point in each of the 6 goals in the 6-3 win against the Puckers last year – seemed to work. Lorcher was held off the scoresheet. The Puckers finally showed a sign of life when Chuck Charles Vallee scored the 1-3 on a second rebound, a buzzer-beating tally at 20:00.

The second period looked a lot like the first. Matthias Rainer stood tall in the Puckers net and the offense couldn’t find a way to solve the tightly knit Cleon defense. 7 ½ minutes into the period, Cleon scored the 4-1. The game seemed to be out of reach. Then Alban Menguelti fed the perfect stretch pass to Nick Aubin who found himself all alone on a shorthanded break-away and brought the Puckers to within 2. There was hope again. But on the next shift already, Lorcher finally scored for Cleon on a coast-to-coast play at the end of a powerplay. The score at the end of the period was 5-2 for the champs. The Puckers seemed to be destined to leave Meudon empty-handed for the first time in 3 years. No win, no medal.

And then the third period happened. The never-die, comeback-kid Puckers showed their usual resilience, their poise, their experience. They were determined to go out and show the whole league that they deserved to be in the Finals. There were many discussions on social media in the weeks and months leading up to the semi-final and final tournaments about who deserved to be there, about whether a team that is not French is even supposed to play for the French championship title. The Puckers were tagged as the underdog all along. And they probably were, despite the tightly fought game against ACBB that they should actually have won. And so they did show the league, beating the reigning champion – unbeaten in the last 5 games in the Finals and on their way to repeating as champs – in an unlikely fashion, down 3 goals heading into the third period, with an epic performance in the final period of a 3-games-in-24-hours tournament at an average age of 44 against a team that was 15+ years younger.

It took all but 26 seconds for Jonathan Laforge to start the comeback. Momo Lutov had the assist. Cleon were suddenly back-paddling, trying to contain wave after wave of attack by the Puckers who had smelled blood and wanted to put the young Cleon team on their heels. When Sean O’Driscoll buried the 4-5 just before the halfway point of the period, it all seemed conceivable. There was no other way, but for the Puckers to make the impossible possible. The Crocos from Cleon came with the largest crowd to the tournament and the crowd was cheering for two periods, but suddenly it was silenced. The Meudon team was watching on the sidelines. Their championship hopes were slim after losing in the first game of the tournament to Cleon. Their last glimmer of hope was a Puckers team that they thought was resigned and beaten. And then suddenly there was life to their hopes, their cheers got louder, they knew it wasn’t over.

The Puckers made it an even bigger challenge when they took a too-many-men penalty with just under 2 ½ minutes to play in the game. But with Cleon taking a penalty of their own just a minute later, there was the opening, the call that they needed to put the extra man on the ice, pull Rainer and push for the equalizer. 85 seconds left in the game. O’Driscoll won the face-off, there was a scramble, there were chances, but the puck came out of the zone. O’Driscoll won the face-off in the neutral zone, Rainer was still on the bench. The extra risk came with an extra reward. Nick "Maurice" Aubin - steady as a rock the whole tournament, scoring 4 goals - found himself all alone in the slot when Laforge and then O’Driscoll directed the puck his way. And he buried it big time, top shelf. The biscuit was in the basket with just 14 seconds left on the clock. The Puckers had tied the game and Cleon couldn’t believe it.

The game was headed to 3-on-3 overtime. The first shift was utter dominance by the three best Cleon players, but Rainer kept his net clean and O’Driscoll had Lorcher. Despite a 20-year age gap (!), Lorcher could not find any open ice and eventually, the puck changed possession. It was a long 80 seconds. The second shift was played mostly on neutral ice. Then, on the third shift, the Puckers took control in the offensive zone. Alban Menguelti had the instruction to play forward for a shift. The last time he played as a forward was the season opening game and he scored 4 goals in that game, including the very first goal of the season. Those were the only goals he would score for the rest of the season... until this shift - it was only befitting that he would score the final goal of the season. The relentless forecheck by Vallee paid off and “Dr Alban” Menguelti – and eventual hard hat for player of the game – found himself alone on the right side of the net. He took a shot from an impossible angle, it went right under the bar and beat the Cleon netminder. The game was over. Cleon was finally beaten, the Puckers bench cleared as if they had won gold. They had not, but they beat the team that beat the team that would eventually win gold. It was a big win in an unlikely, but typical for Puckers fashion. The bitter tournament had a sweet ending and another proud Puckers moment was born.

Meudon would beat ACBB in the evening game to clinch the title and hand the Puckers their third medal in three years. Meudon owes them, they know it. They will meet again, maybe next year. The outcome may finally be different.

Special thanks to the Puckers TV crew for their relentless coverage of the Puckers not only during this tournament but throughout the year! The footage is amazing and it captures all these crazy memories that the Puckers grandchildren would have a hard time believing otherwise! Stay tuned for the videos and see you all in the new season! Puckers will be back with a vengeance!