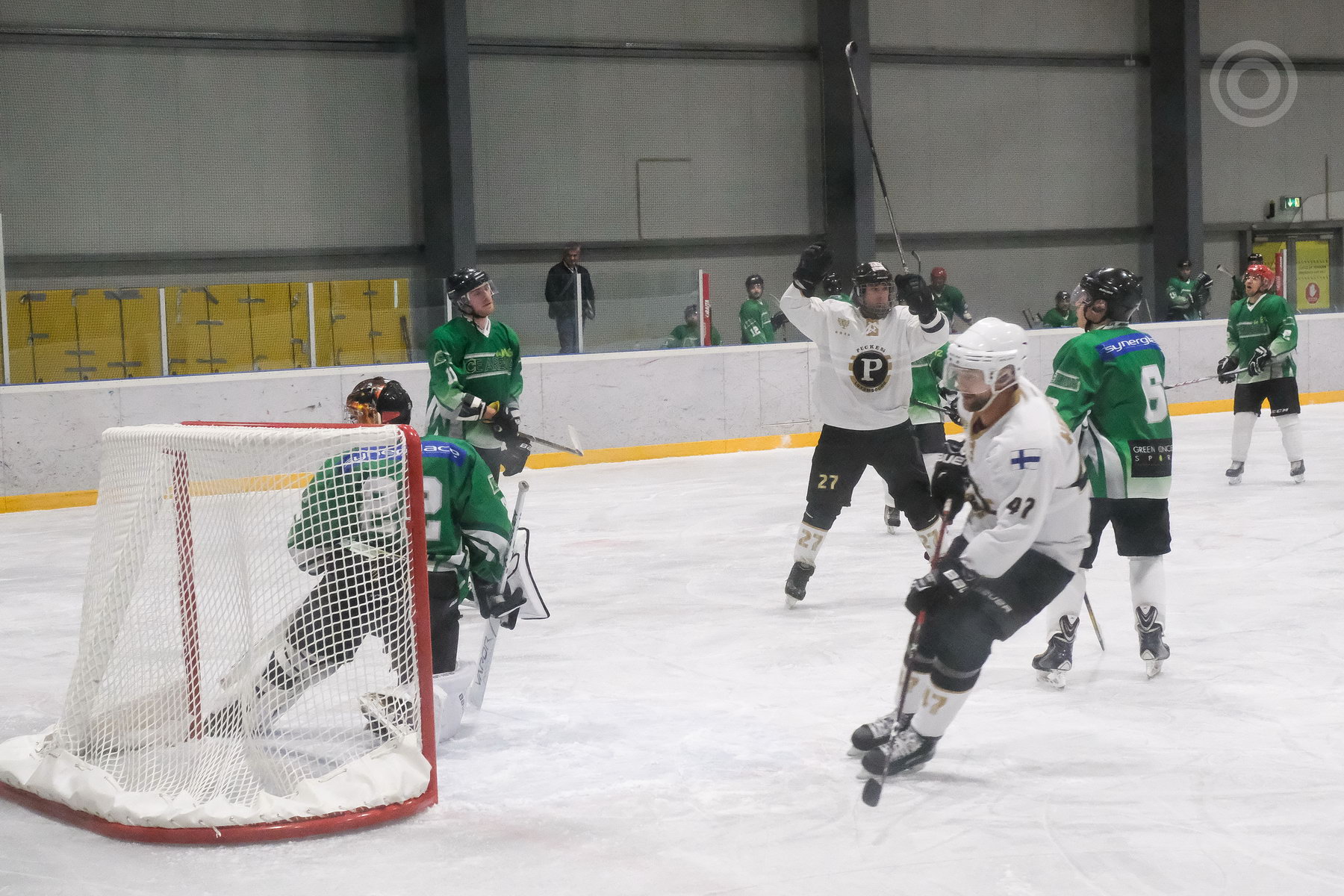 Puckers cruise to easy wins against Amneville and Metz

The Puckers played their third game of the season on Sunday,  November 18 in Amneville. On very bad ice, the hosts from Amneville had the better start and managed to take the lead just around the 4 minute mark, a lead they would hold onto for almost the whole first period. They had hope. But that hope was squashed by 3 unanswered Puckers goals in the final 3 minutes of the period, followed by another 4 goals in the second period. The game ended with a 12-4 score in favour of the Puckers. Top scorer and wearer of the hard hat was Nick Maurice Aubin with 4 tallies and 2 assists. Jonathan Laforge had another hattrick and 5 points and the other goals were scored by Sean O’Driscoll (2), Mike Mekhaeel, Frederic Leduc and Dr Alban Menguelti. Another easy win for the confident Puckers.

Then last Saturday, in Kockelscheuer, the Puckers hosted the newcomer team from Metz. During the pre-game ceremony, former Pucker David Donzel and new recruit of the Metz team was honored with the bronze medal from last year’s finals in Meudon. And Oiseau volant Donzel must have done the full scouting report on his former team, because Metz came out flying. With a good first line of former D3 and D2 players, the speed and skill level was not what the Puckers expected. And as a result, former Tornado player Yannick Hamri tallied the first Metz goal just 55 seconds into the game to give the guests the lead. Just two minutes later, Alban Menguelti tied the score with a shot from the point after a faceoff win. It took all but 10 seconds for Metz to beat Puckers netminder Thierry Van der Kallen again.  Shortly after, “rookie” Antoine Verdier scored on a repeat play from the first Puckers goal, face-off win, shot from the point, goal! Metz managed to score one more goal before the end of the period, but Verdier found the back of the net for a 3-3 tie heading into the first intermission.

The game plan was clear for the second period: put the game away with a couple of quick goals. And the Puckers followed the game plan to perfection. With a flurry of 5 goals in less than 6 minutes, the game was out of reach. Sean O’Driscoll had a pair, Miiikka Heinonen who replaced the absent Nick Aubin on the second line had a goal and Verdier completed his hattrick. Jonathan Laforge then scored shorthanded on a feed from Patrick Ahlstrand. Chuck Vallee scored the 9-3 just before the end of the period and the second intermission was underway.

In the final period, Oiseau and his troops managed to score one more goal, but the game was no longer on the line. Jonathan Laforge beat the Metz netminder again, Mekhaeel finally scored after assisting on 5 of the goals, Fred Leduc added to his stats and Momo Lutov had another highlight reel goal to end the score at 13-4.

Even though they had a slow start to the game and the first Puckers line had to battle a strong first Metz line, it was a victory that was never in jeopardy. The Puckers were and are the benchmark for the Division Est again this year and claim first place in their Division.

The real feat happened on Tuesday night in a friendly game against Tornado. With almost full squads squaring off against each other (Tornado was missing regulars Ossi Uotila and Markus Eriksson and Puckers were missing top scorer Jon Laforge, Miikka Heinonen as well as defensive studs Cyril Schweitzer and Alban Menguelti), the Puckers managed to beat the younger brother Tornado 4-2 in what was an exciting and (for Puckers’ standards) fast game. Their transition game and scoring efficiency surprised Tornado and the Puckers held the score in the first two periods (1-1 and 2-2) before scoring two in the final period and holding on to the score despite a flurry of attacks by the relentless first Tornado line. Matthias Rainer was flawless in net, Nick Aubin scored a pair and Momo Lutov and Chuck Vallee sealed the win! What a game and what a historic win!