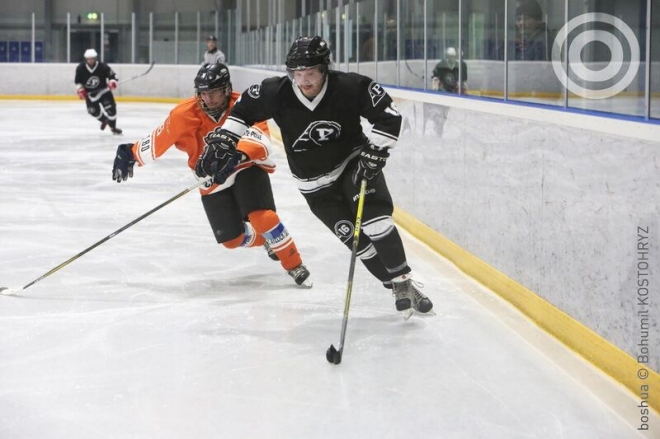 On Saturday, the Puckers hosted past nemesis Gamyo Epinal II to continue their rivalry. After a tight 5-4 victory for the Puckers in Epinal in November - Epinal's only loss so far this season - it was expected to be another thriller.

But Epinal couldn't count on some of their key players, including sniper Ludo Thommassin who is out with an injury and the Puckers dominated Epinal in every facet of the game.

Right from the first shift, the Puckers dictated the pace of the game and it would become a long night for Epinal goaltender Mathieu Perrin. All three lines started clicking straight away for the Puckers and 3 goals in a span of 4 minutes, one by each line, ensued. First Jonathan Laforge after a face-off win by captain Yves Barthels and a tic-tac toe play with linemate Nick Aubin, then, less than a minute later, Mladen Lutov in the slot after passes from Mike Mekhaeel and David Donzel and finally Sean O'Driscoll in his second game as a Pucker came through on a feed by Cyril Schweitzer and Peter Hult.

Matthias Rainer in net for the Puckers had a very quiet first period and another flurry of 3 goals came towards the end of the period. Aubin scored from David Jozek, then, on the same shift and 7 seconds later, Laforge netted his second on a cross-ice pass from Aubin and finally Mekhaeel one-timed Lutov's pass into the open net to finish the 6-0 first intermission score.

Epinal has not been hit with that many goals in years, but it wasn't finished. A bit over a minute into the second period, Mekhaeel got his second of the game while Laforge had the hattrick at the 25:09 mark already after a nice combination with his two linemates, Barthels and Aubin. Rainer then left the crease with half a shutout and was replaced by Thierry Van Der Kallen. Epinal got a little bit of life when the Puckers had a couple of defensive breakdowns that led to breakaways. Epinal managed to beat Van der Kallen twice in a span of 4 minutes just past the midway point of the period and the score was 8-2 before Mekhaeel had his hattrick helped by Charles Vallee and Lutov. Just before the buzzer to end the period, Epinal managed to get a third and last goal past Van Der Kallen and the intermission score was 9-3 in favour of the home team.

With the game well under control, the Puckers had three more goals in the final period. First Lutov with his first of the night and twelfth of the season, then David Donzel and finally Laforge with his fourth of the night and team-leading twelfth as well. A nice display of skills ended in an unusually lop-sided 12-3 win for the Puckers who now have full control over the standings in the Division Est with 4 games remaining in the regular season.

Hard hat went to new recruit and scoring leader Jonathan Laforge for his four goals after a two-week absence because of illness and this after a heavy collision with a teammate at the Friday practice.

To be noted that Puckers TV was at the game, courtesy of Liam McEvoy and LDMCEVOY.com. Check out the post-game interviews, coming soon!