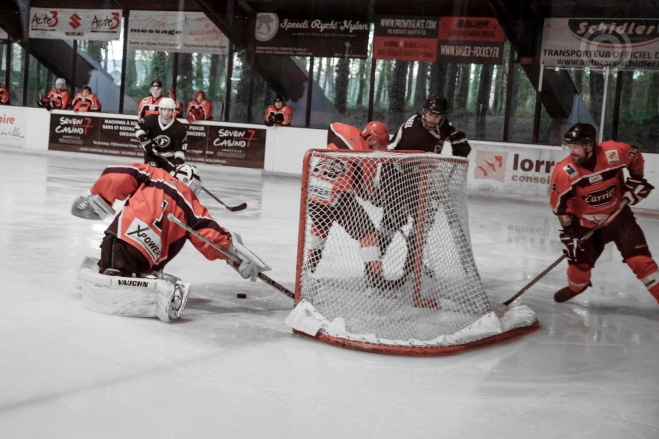 After an intense weekend of hockey with a late night practice on Friday and a tournament Saturday and Sunday in Bitburg where they came in third place, the Puckers were headed to Amneville to meet the team that hovers at the bottom of the lower pool of the Division Est with a chance to clinch the championship with just 1 point.

With a number of key players out of the line-up due to holidays or injury, only the “black” line was complete. Nevertheless, the line around “Maurice” Nick Aubin and captain Yves Barthels opened the scoring on the very first shift, just 28 seconds into the game. Aubin converted on an easy feed from Patrick Ahlstrand. The same line then scored the 2-0 on their next shift, just a couple of minutes later. Maurice found the back of the net again after a nifty move around the two Amneville defensemen. The pressure to establish their heavy favourite status was off the Puckers’ shoulders early on. On the third shift of the same line, Ahlstrand then scored his first of the game.

The black line of Momo Mladen Lutov, Mike Mekhaeel and Montreal Express Charles Vallée found their own mojo shortly thereafter and took over the scoring from the “white” line. Mekhaeel completed the hattrick before the period ended with a quick power-play goal on a feed from Vallée followed by a coast-to-coast goal and finally Lutov put the finishing touches on a tic-tac-toe play and the Puckers headed to the lockers with a comfortable 7-0 lead.

The second period was not as great for the Puckers. The Amneville team played a fast skating and slightly physical game that threw the Puckers a bit off course. The rout from the first period did not continue and it would be the hosts that would finally find the back of the net on a breakaway against a chanceless Thierry Van der Kallen (who up to that goal, 7 minutes into the second period, made some key saves). Lutov and Mekhaeel then rallied the team around two quick goals, first by Mekhaeel on a beautiful combination with Lutov and Vallée and then by Lutov himself on a pass by David Donzel – who, after a short injury driven break, was back at the blue line. But two quick goals just before the end of the period gave Amneville some momentum and stunned the Puckers who lost the period 2-3 even though they still led the game 9-3.

The third period started with little action on either side and it took 8 minutes for the Puckers to strike again. Mekhaeel scored his fifth goal of the game, assisted by Lutov and Vallée. Rookie Kevin Guillard scored on a backhand 360 a couple minutes later. Aubin then completed his hattrick on the powerplay after taking the drop pass from Barthels and Mekhaeel scored his amazing sixth goal again with the help of his two linemates Lutov and Vallée to cap the win at 13-3.

A bit of a chippy game with an Amneville team that lost its league-leading 9th point to a malus due to excessive penalties.

With the win, the Puckers clinch the Division Est with 46 points already before playing their final game at home against Colmar next Saturday at 20:00. Runners up are Mulhouse with 41 points and Strasbourg 1 with 40 points, both with no games remaining. Epinal, the Puckers’ arch-rival will miss the playoffs for the first time since the Puckers joined the league.

Hard hat for best player as elected by the team went to Nick Maurice Aubin for his hattrick in the game, but also for his accomplishments and hattrick off the ice after the birth of his third son just a week earlier!