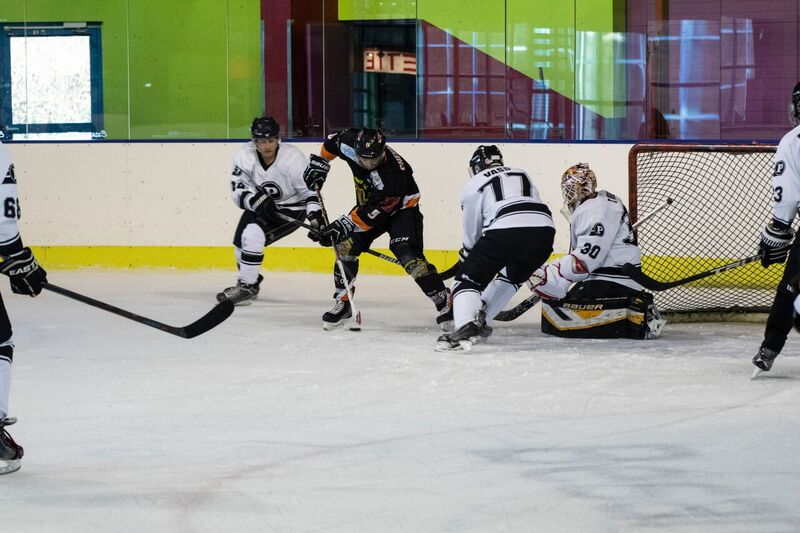 It was 6:30am on a beautiful, cold, Sunday November 18 morning that the Cool Puckers climbed onto the bus to travel the 330km south to Besançon. A matchup the cool puckers have never won meant that few were expecting an easy day on the ice. Nevertheless 15 players made the trip.

With regular defenseman Liam McEvoy relegated to helping on the bench due to injury, the Cool Puckers iced 5 men in defense, with center-man Viktor Vass filling in for McEvoy.

A goal 80 seconds into the game from Besançon’s star, Martin Mickael, set the tone for the game he would go on to dominate with 6 goals and 4 assists. The Cool Puckers may be an inexperienced group but they don’t lack desire and a terrific solo play from new Russian recruit Sergej Lichtersv brought the first period to a close with the score at 1-6 to Besançon. The score however was a harsh reflection of the performance and a few unfortunate bounces led to Cool Puckers' goalie Terrence Weber picking the puck out of the net.

The second period started with an emphasis on playing solid team defense. A tactic that led to a far more even contest for the majority of the period. Olli Kankare was particularly strong in one on ones and defusing dangerous situations with his composure on the puck and positional play. Going into the last 4 minutes of the period Besançon had scored only 1 to extend the lead to 1-7. As is often the case in ice hockey though, 240 seconds is enough time to completely change a result. On this day, Besançon would take advantage of a combination of fatigue and a lack of focus from the Cool puckers to strike 4 goals and leave the score 1-11 at the end of 2. The home team were deadly efficient on the power play. Scoring 3 goals from 4 attempts with the man advantage.

With the game seemingly out of reach going into the 3rd period, the Cool Puckers appeared to play with a lot more freedom. They took the fight to Besançon and the ever dependable Kevin Guillard put 2 goals on the board to remind the decent amount of spectators that the young team from Luxembourg wouldn’t go down without a fight. Unfortunately the difference in skill between the two squads was present for all to see and Besançon would continue to fill the Luxembourg net and run out 3-18 winners. A disappointing result for the traveling team, however, not a single player on the Cool puckers could have been called out for a lack of effort. The game was very clean from both sides and Besançon showed great class in taking a group photo and providing their guests from Luxembourg with beers for the long trip home.

After 4 rounds of matches, Besançon have emerged as perhaps the only team capable of challenging the bronze medal-winning Puckers 1 team for the top spot in the north east division of the Trophée Loisir this season. Meanwhile the Cool Puckers continue to search for their first win with Belfort up next on December 8th at Kockelscheuer.